Joel and I had a pep in our step as his 'duck' alarm on his phone woke us up at 4:30am yesterday morning.  The CLE Rite Aid Marathon, Half-Marathon & 10K run bringing in a record breaking 19,000 runners & walkers by 6:00AM this morning into downtown Cleveland.

We drove with lattes in hand while watching the fog hover over the city.

We ate our bananas, drank our electrolyte-filled water & stretched.  We laughed at some of the funny hard core runners who walked around like they owned the universe.

Music playing & adrenaline pumping we were off.  I thought back to junior high....to a former track coach who told me I probably would never run long-distance and only let me do sprints & shot put.  I thought of her and wished she could see how her words affected me.  How they motivated me to work hard & accomplish a goal.

Perhaps 'she' is the reason I have never considered myself one who would ever be a runner.


Today changed all that.

We ran down St. Clair and seeing the fog lift over each building completely inspired me.  So many negative connotations have come with this city - yet, it's the people who completely redeem it. It's the people who work hard to come back at the trash talk or the 'mistake on the lake' labels its received.  It's those who took a risk on a city that make its beauty so obvious & so intriguing.  I was proud to run on her streets.  I was thrilled to share her space with so many.

I finished my race.  I met my goal.  I just kept running.

My husband's hug at the finish line will be one I'll remember forever.  To hear his words say, 'I'm so proud of you baby....' made all those weeks of training worth it.

The girl who 'wasn't cut out for longer distance running' ran 6 miles today and plans to run 13.1 next year.

BIG thanks to all of you for your calls...texts...hugs...this was a BIG deal for me.  Your encouragement helped such a great deal. 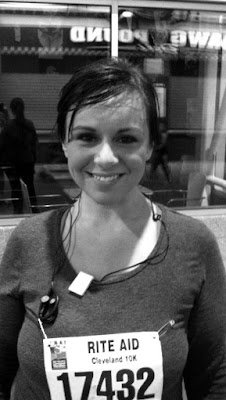 Posted by JMillerFam at 4:15 AM

CONGRATULATIONS!! Awesome post- and and even more awesome job running the 10K! I am so proud of you!

Such an inspiration!!!! So proud of you & your determination!!!!

So proud of you!