I am procrastinating right now....and yes, blogging can be just that for me. I have a pile of 'stuff' to go through....bills to organize, insurance calls to make, a few 'thank yous' to send out, and it gets me thinking. The physical piles are enough ....they look at me - they taunt me - when I want to sit at a clean desk, it forces me to deal with them.

What about the junk on the inside? The bitterness, the judgement, the critical nature, the unforgiveness, the negative self-talk? It's not quite as easy to take those piles and throw them out....it's also not as easy to see them. I watched a movie last night in which a group of women talk about how they are supposed to be each other's "mirrors" - to show them reality vs. perception. And just like we all do when we put on that holiday weight, we avoid every mirror in a 5 mile radius so we don't have to SEE it.

Friendships are designed to be this way....they are not ALL that way....but those few and special friends with the courage to be truthful....are meant to be mirrors. My husband is a wonderful mirror to me....shows me truth while still telling me of his love. It's a delicate balance but because I trust him....I can look right at myself and deal with those piles.

This year....take a look at your piles....not just the ones sitting on the counter or your desk but the ones inside. Tackle that unforgiveness....swallow that pride....put away the judgemental finger....and put on love.
Posted by JMillerFam at 7:29 AM 0 comments

It's a total committment....a total and complete act of sacrifice. It got me thinking, though. Isn't that what we sign up for when we decide to be parents?

With Jude, our firstborn, we didn't plan for him. We didn't know what to do when that little stick had 2 lines on it. I remember it distinctly - a warm Monday morning....I was preparing for a large sales week at the hotel I worked at in Grand Rapids. I had recently taken this "Director of Sales" position and was still in my 'honeymoon' phase. I woke up early and had noticed a few days back that I was late but wasn't that concerned.

I had a pregnancy test in a drawer so I took it just to "rule out that possibility" and get showered/ready for the day. WHOA! I freaked out. I.TOTALLY.FREAKED.OUT.

I went to Joel....still warm in bed....pulled him out of his slumber and forced the test in his face....he rubbed his eyes, adjusted his contacts....and said, "Yep, that means positive...you're pregnant!" And just like that.....LIFE=Different Forever!

Fast forward 5 yrs....I've just had my 2nd son....breastfeeding didn't work with Jude (though I really wish it had) and now with Leland, I am being taught such a lesson. It's 100% total giving giving giving with no expectation of anything in return. It's an amazing resemblance to the relationship God desires us to have with Him. There is no end to His love....no way it could run out. I've been paranoid many times that my milk wasn't plentiful enough for this growing lad...and yet everytime he goes to eat...like magic, he is filled, content and full of coos and smiles.

It comes with its humor, however, when this child goes through a growth spurt and I feel like I am just a human bottle/gas station....or when I fear answer the door without putting on a shirt first. This season is quirky and hilarious....exhausting and exciting...but wow, has it drawn me closer to the truth of sacrifice. Leland may never have a recollection of this time....just like how he won't remember the mystery of the womb, but I will shall not forget it nor all the benefits of God's unending love and mercy.

Posted by JMillerFam at 5:45 AM 0 comments 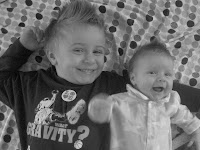 May it be a sweet and precious time with loved ones celebrating the birth of Jesus....

Joel, Jess, Jude and Leland
Posted by JMillerFam at 9:33 AM 0 comments

So the transition has truly taken effect...2nd child here...firstborn is more than OK with Leland. In fact, Jude daily surprises me with his kindness....loving nature....and patience for this little person who has come to live with us.

We took the boys together to pick out our Christmas tree....surprisingly we found just the right one and I am SO in love with it this year. It's perfect in every way. Leland stares at the twinkling lights and I so enjoy watching these new smiles emerge from this tiny little face.

As we await the holiday season, Joel and I have drawn close...being so thankful to God for His blessing and timing...thankful to family for their love, service, prayers and concern....thankful to friends for their listening ears, loving hearts, and open hands. It's a year we will never forget and we look forward to a year full of memories.

I am hoping to make a list of resolutions that I actually stick to....this is something I've been thinking about for a while now...here it is so far:

2-Serve with Joel/Jude in an outreach of some kind....(homeless ministry, etc.) This is the age I learned about the compassion of God.