With the exception of both our boys being wide-eyed and bushy-tailed by 6:15am...this morning has been what I've been desiring for a while.

A day with no demands upon us.  (Can't think of the last time we had one of those...)

A morning where I played and giggled with my sons so Joel could sleep in...and then we hurried to prepare granola pancakes before he woke up.  Good thing he woke up a little before I was done as I realized a little late in the breakfast prep that we were fresh out of syrup.  Joel made a syrup & newspaper run.  Coffee Brewed. Pancakes devoured.  Dishes cleaned.

Leland played and played with every piece of tupperware I have.  Now all the lids are not with their corresponding container but he had fun!

Joel went downstairs with the boys to play his new guitar...the kids love being around the speakers/pedals/microphone....had to take a few pictures of the sweet time I know my boys will always talk about when they are grown up.... 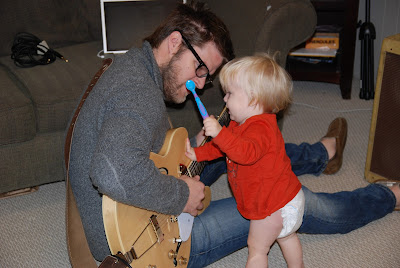 Posted by JMillerFam at 6:37 AM